Wednesday night, I took a MUCH needed break from working long days (and nights) and went to see the True Colors Theatre production Broke-ology with my neighbors. 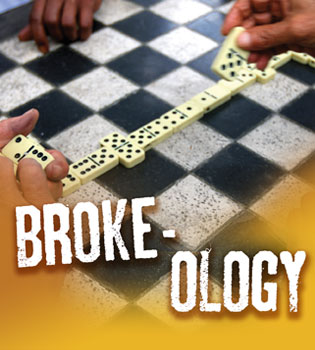 I didn’t really know what to expect from the title, but the play definitely surpassed my expectations.  Not focused just on the fact that the family was poor and how some things in life are just more important than how much money and possessions you have, this play explored many issues that hit close to home: how to take care of an illness-stricken family member, the responsibility of being close to home versus being limitless in chasing dreams, family planning, and even how people deal with death.

Since I want you to go see it (it’s at Southwest Arts Center until Sunday), I won’t get down into the details of the plot (except where it relates to my impending ramblings).  Suffice it to say that despite my sleep deprivation this week, I didn’t fall asleep for a second!

I love when art causes me to slow down and self-reflect, which definitely happened Wednesday night. One of the characters went home to Kansas City, Kansas after receiving his graduate degree from UConn.  His brother never left home, and although he works at a wings spot, he has been instrumental in helping to make sure their father, who is suffering from MS, is okay.  The younger brother, the UConn graduate, has no idea just how difficult it has been for the family and is extremely torn about staying at home and helping out but knowing he will likely get “stuck” or moving back to Connecticut after a summer position with the EPA and following his desire to teach and do environmental research with his academic mentor. Can you say para-llel? I’ve often felt the same way–except not as torn just because I go home semi-regularly since I can drive there. I’ve considered moving back home sooner than later (I at least want a second home there), especially when I see how stressed my mom gets trying to help the rest of my family.  Or even when I think of every day things that I could do if I were there that I never have time to do during my visits, like playing spades with my family like the characters were playing dominoes or learning crocheting techniques from my grandma for more than an hour or two here and there. I love being at home, and I love my family more than anything. But I’ve always been the explorer. The adventurer. I’m not quite ready to lay my roots down there. As far as my career is concerned, I could make some small strides at home, but I’m really flourishing here in Atlanta and I’m not ready for a slight career change, a veer on the road if you will.  I could work for organizations who are my clients currently, but I like being the consultant, and I love working in different communities, seeing the different dynamics.  But I always have my family in the back of my mind. Wondering if I’m being selfish. But I know in the grand scheme, I’m not because I give back and help out in my own way. But is it enough?

I got a little sentimental, though, when the older brother who has been in Kansas City the whole while told his younger brother that if he moves, he will miss all the milestones of his baby that’s on the way.  I immediately thought of my nieces and nephews, who I can’t be as close to as their aunts and uncles that are in town. I write letters, keep up with them on Facebook, spend time with them when I go home, but I’m definitely not doing nearly as much or being as influential in their lives as I would if I lived there. But on the other hand, I think back to my own aunt Vernita. She was an explorer like I am. She lived in DC until she was murdered when I was in the 9th grade. I remember vividly being so excited to see her and spend time with her when she would visit.  Although she lived so far away, I didn’t care as a child.  I can still remember her smell and her smile, even her laugh, and I would just bask in her presence. I still think about her from time to time, and it hurt me to the core when she was taken from us. I never begrudged her being away–in fact, it inspired me. My mom has told me countless times over the years that I remind her of Vernita. And that makes me feel close to her, even though I didn’t spend as much time with her as some of my other aunts and uncles.

I would keep going, but this post is getting a little long. And truthfully, I’m getting a little misty thinking about my aunt.  So… I’ll leave you with this: Cherish your family, no matter where they are. And seek to be a part of solutions, not problems.  Happy Friday, people!