Boy, this week has been full of ups and downs, but the ups were AWESOME!! I have *three* Features, and I haven’t yet decided if I need to just spread them out over the next three weeks or if I need to find time to spill my guts about all three today.  Either way, they’re coming.  Last night’s Black in America: Almighty Debt was a well-attended event with tons of great and thoughtful dialogue.  Wednesday night I saw Night Blooms at Horizon Theatre, and the production is a must-see.  Finally, last Saturday, a couple of friends and I participated in the Atlanta Challenge, and it was uber fun.  I also owe my thoughts on a bunch of other stuff (Twist, I Dream, Soundtrack  of a Revolution, 41st and Central–I haven’t forgotten!).  Who knew I was so busy? (Yeah, I know, I know, we all did.)

So stay tuned.  And THANKS to everyone who has been joining me in all this fun! 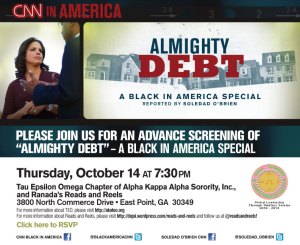 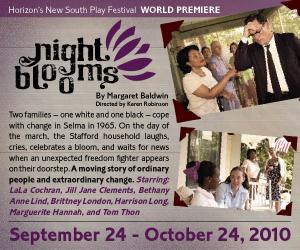 This is what weekends are made of.  I’ve been on a cultural excursion all weekend!  I’ll be back later to talk about them all, but here’s a taste.

It’s National Black Arts Festival week, and I took part of some awesome offerings.  Friday, I attended the screening of Soundtrack of a Revolution, which is a documentary that highlights how music played such an important role in the Civil Rights Movement.  Here’s a trailer.

After that, I rushed over to the Symphony Hall to see the To Curtis with Love tribute concert for Curtis Mayfield.  My favorite Curtis Mayfield song, “Makings of You” was performed by Dionne Farris.  My favorite undergroundish artists, Joi and Van Hunt, were there, along with Frank McComb, the Impressions, and Eddie Levert.  It was a great time.

Yesterday, I went to see The Sorcerer’s Apprentice, which I really enjoyed. Then I went back to the Rialto to view 41st and Central: The Untold Story of the L.A. Black Panthers.  Man, it was really a wonderful, captivating documentary.  I have always admired certain aspects of the Black Panther Party for Self-Defense, and I’ve looked up to some of its leaders, but I never even knew about Bunchy Carter, who was a really impressive man.  The documentary took us from the beginnings of the Southern Cali chapter of the Black Panthers to the disbanding of it. Here’s the trailer.

After the documentary, I was able to listen to a panel discussion featuring Chuck D, Kathleen Cleaver, Wayne Pharr, the producers of the documentary, and a couple of US organization representatives.  My favorite quotes of the night were from Chuck D:

“If you don’t identify your enemy, how the hell are you gonna fight?”

“Racism comes out every year like a new model car. We have to recognize it and know how to respond.”

So much more to read, research, and consider.  I’m so happy I was able to participate in this event.  My favorite quote in the documentary was

“If you want to be a revolutionary, you have to study revolution.”

Today (and on Thursday as well), I am volunteering for I Dream, a musical production about the life and works of Dr. Martin Luther King, Jr. 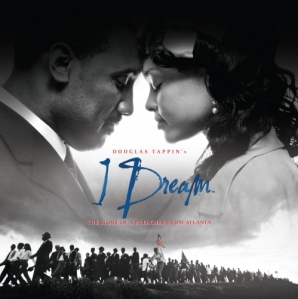 As the weekend comes to a close, I appreciate all the mind-expanding, thought-provoking activities I have access to.  Didn’t I just say the other day how awesome my life is?  Happy Sunday, people.