Back to those doggone squash and cucumbers. Much of what I learned about trying to grow them applies to my life in general. It all started when I went to Chicago in June to celebrate the 30th birthdays of three compadres. I purchased an automatic sprinkler so that my plants wouldn’t be thirsty for a full weekend. Well… I called myself testing it the night before and setting the timer for every 6 hours. Didn’t work out like I thought it would.

My cucumbers were overwatered, while my squash was underwatered. Isn’t that what happens sometimes in our relationships? You put in way more effort than is necessary for some people and neglect others. Yeah… So after that it was making up time. I had to figure out what could be salvaged. Which isn’t always that easy. Last night, I realized that I really need to sit down and do what I do on a somewhat regular basis–a friendship evaluation. But later on that–let me finish talking about my poor plants. 🙂

So my squash was growing, but they were almost orange, instead the great yellow my first crop was. In addition, the actual vines/roots were turning a dark green and looking pretty ashy and almost dead (and some were dead) and starting to look mangled. I probably  should have abandoned ship then, but Determined Dejoi couldn’t just admit defeat. I started back to my original regime after cutting off all the dead parts. It was looking pretty sparse after I cut all the dead weight off. After that only one more squash grew.

Lesson: When there’s more death than life or more negativity than positivity, it’s time to let go. Some things aren’t worth saving.

On the other hand, my cucumbers were growing, but they were discolored in a different way and disfigured. (Have you noticed here that colors tell the story if you only pay attention?) These babies were yellowish (not green) and round, instead of long. So I added soil to the pot to try to soak up some of that excess water, and I moved the pot so that the plants would get more sun. But more than that, when I looked at the vines, there were some serious issues. There were black vines all over the place. So I cut all of those off, but the cucumbers never grew normally, and I was scared to eat the warped cucumbers (although they smelled like cucumbers and Smokie enjoyed the one that fell off the vine, lol).

Lesson: You can flood anything or anyone or any situation, which warps the fruit of whatever seed you planted. If you’re putting more into something or someone than you’re getting back,  you need to evaluate the situation.

My first summer of gardening was great. I had some wins and some losses, but I learned from it all. My carrots and broccoli are still looking great so far. I’m even considering growing onions later in the winter. Here are some questions that I’m asking myself during my friendship evaluation:

In all of this, it’s important to honor your instincts. Some friendships are for a season, some for a reason, and some for a lifetime. No, I don’t talk to all my friends every day–I have people I truly consider friends who I have confidence in even though they’re not on my normal rotation. So you have to consider all that. And you need to ask yourself if you spend more time and energy on the people who don’t add to you than who do. If so, you have some adjusting to do. I know I do.

Almost 30! Many lessons down, many more to go!

So I was (am) Farmer Jo this summer, and I loved it. Back in May, I was inspired by my green thumb friends and family and planted my own deck garden. Recap: I bought railing planters, soil, seedlings, a few seeds, and went for it despite my failure at keeping a couple of houseplants alive. Here’s how I did.

First of all, the summer made me scared of seeds. I planted seeds in two pots: a lily and a sunflower. The lily never sprouted from the soil at all. Not sure what happened there. The sunflower came up and it was beautiful until I found out that sunflowers like sun but not too much. It was purty while it lasted but I allowed it to bake to death. So if I ever plant more sunflowers, I’ll put it in a place that gets a little shade during the day. 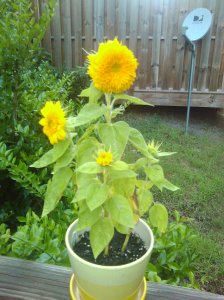 But you know, I don’t back down to any challenge. Seeds can’t punk me! Besides, it is something about checking every day and one day stepping outside to see a new wisp of green peaking out of the dirt. A sense of accomplishment peaks out of the soil with it. For the fall, I’ve planted broccoli and carrots and both have started sprouting. #winning! They look great, and I can’t wait to see how well they do.

All of my veggies this summer started as seedlings. I just didn’t want to take any chances with them. My peppers are banging. Nothing I’ve done have deterred their beautiful growth. Which makes me grin, especially since my fajita bell peppers looked to be on their last leg the day I planted her. They looked awesome the entire season and gave me plenty of peppers to cook. You can taste the heat in the cajun bell peppers. And you can smell the yumminess of the fajita bell peppers. As the cold weather enters, it has made me frown a bit to see them die, but that’s a part of the cycle of life. I’m very proud of my peppers. I’ll definitely make this my staple every year.

My okra was comme ci comme ca. Partially due to space, I only got one okra plant, so there was never any harvest that was big enough for me to fry up more than a couple of slices of okra. It was usually two at a time. It has gotten so tall though. It’s unbelievable. I’m not sure if I’ll plant another of these next year. I just don’t have the space to grow them in bulk that I can see. But my one lil solo plant has hung in there.

The serious lessons were with my squash and cucumbers, my pseudo disappointments. But that’s for my next post. 🙂

It’s spring time, and this year I was inspired to start a deck garden. As much as I talk about healthy/sustainable living, it is time for me to put my money where my mouth is. I have a ways to go to completely turn my home into a place I can completely brag about. Especially when it comes to plants. I haven’t had much of a green thumb, exhibited by the couple of plants that haven’t made it. It never made sense that it didn’t come naturally, though, because my parents and grandparents are great with plants, so I thought to myself, ‘Self, you are a quick study. If anyone can figure this gardening thing out, you can.” So I scoured the internet and read as much as I could find about deck/container gardening. I also got some great tips from my friend Sylvia who started gardening last year.

On Friday, I was excited to see my deck railing planters sitting in their box on my doorstep. I went to Home Depot and picked up all the items on my list that I needed to get started. Saturday, the time had come. I put on my gardening gloves and got started.

Now for the veggies I planted, I decided to start with seedlings. I wanted to make sure I set myself up for success. Along the way, I gained inspiration from my fajita bell. When I got home from the Swapnista Party, which I’ll blog about later, she was kinda withered looking (I wish I had taken a picture). But not too long after she got her new home, she started looking even better than when I bought her yesterday. That really got me revved up and ready to continue this adventure. I used potting soil with fertilizer already in and I will just have to make sure I give my plants some food from time to time (and of course, water them regularly–that will be the real challenge when I start traveling this summer).

The rest of my plants, since I am experimenting, are starting from seeds. The strawberries and the flowers will be interesting to watch.

If I’m super successful, I may end up having to build an long, elevated (Smokie will eat them if given the chance) gardening area out there. I already know that it’s totally possible for my veggies to outgrow the containers, but we’ll see when we get that far.

I’ve gotten the initial steps out of the way. So now it’s time to tend my gardens and wait for the harvest. I really can’t wait to see what happens. Maybe I’ll host a 1st harvest party and cook a little something for my friends with my fresh veggies. We’ll see.

So in honor of the spring and of my new deck garden, my blog is now green. 🙂 I’ve finally planted my veggie seeds, and now I need to take an inventory of the life seeds I’ve planted. What seeds are you planting this season?