Where were you when Hurricane Katrina wreaked havoc over the gulf coast communities and when the levees broke? I was in Atlanta, worried sick about my friends and their families and about the city I have had a sincere love for since I was a little kid—New Orleans. I remember not being able to get in touch with anyone for weeks because the network was down. And I remember feeling like there was nothing I could do. I did clothing drives for my friends, but it never seemed to be enough.

Well, five years have passed since that disaster that hit so very close to home and affected so many people that I personally know. And still, the city has not recovered. There are still empty but overgrown lots, houses that are abandoned, people that can’t return yet. There’s still so much to do, and this past weekend, I helped do it.

I led a group of 15 volunteers—3 traveling from here in Atlanta, 2 from Jackson, MS (plus a hubby–shout out to Trey), 1 from Vicksburg, MS, 8 from in and around Hattiesburg, MS, and 1 from Chicago, IL. We worked with Hands on New Orleans in two areas of town. And boy, were those two volunteer projects different.

On Saturday, we went to Harvey, Louisiana, which is on the West Bank of New Orleans. The project was with the Latino Farmers Cooperative of Louisiana to move their Esperanza Neighborhood Farm. Not just develop one—move it. From one parcel of land to another.  I walked into a land dispute that I had no knowledge of until we showed up to work. The organization had received an acre of land from a board member, but they didn’t go through the official channels of learning where the property lines were. Turns out they spent months creating a garden on someone else’s land—someone who didn’t want them there. So much in fact that the owner of the land showed up with police to make sure we were moving the garden, and not tending to it.

That whole situation was a mess.  Both sides were wacko.  She was wacko because she felt like the owner owed her something.  No ma’am.  Her organization should have done their due diligence to ensure they understood where the property was.  So she kept calling this man a bad person because he didn’t want to lease her the land for the three months it would take to reap the harvest.  It’s his land so he has a right to say no.  But going by her behavior and attitude when the owner pulled up (she was even rude to the police who weren’t at all mean when they pulled up), it’s clear that she was not pleasant ever in the situation.  So much for the attracting bees with honey because I’m sure when he (a black man) first pulled up to ask what they were doing, a group of white and Latino people working on his land, they probably acted like he was the one who is crazy.  He ordered them to move the garden asap. Now he’s crazy too, though.  First of all, she did him a favor really because the land was very much not taken care of before they made their mistake, so he really won out on that end of the spectrum.  However, he ordered her to move the land, but was threatening to charge her with trespass that morning (not us, her, lol–we 15 were not going to jail over voluntarism.  No. indeed.).  Well, sir, she can’t move the dang garden by osmosis.  We had to be on the property to uproot it all.  Once we, the sane and calm and unbiased black people, explained that to him and the police, though, he exhaled, still a little tightly wound, but just said it needed to be gone by the next day.

So my group of 15 had the task of moving a sign that had been cemented in the ground, uprooting a fence, clearing the land on the property that actually was for them (and by clearing I mean moving loads and loads of vines and trash), preparing it for soil, digging up and moving the soil from the original garden, and finally, moving and replanting the crops. It was very hard work, let me tell you, and the project leader was more like an overseer or slave master than a volunteer coordinator. She was barking orders at us and showed little to no appreciation even though we did in 5 hours what took weeks.  I think I knew it was a wrap when she asked us to relieve the Dillard students who had only been there for an hour compared to our four, and wanted us to stop planting to start back digging.  Oh, and did I mention she had stopped working because some students from Princeton had come to interview her for a study they’re doing about farming and community gardens.  Did I mention that the owner of the land of the first garden is attempting to sell it to a mechanic shop (we found that out from a neighbor)?  So… if that happens, surely the garden will not survive behind that. We left feeling borderline defeated and wondering if we had wasted a day. 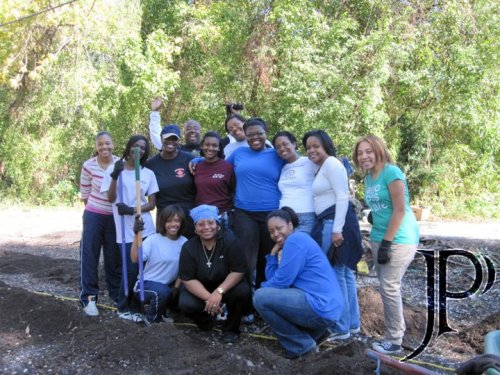 The bright side of things is that the whole group felt some kinda way after leaving so we decided to unwind at a nearby daiquiri shop, where we played some New Orleans classics (so classic that the owner of the shop turned the music up louder and customers were coming in bobbing their heads–woot woot for the DJ (me)) for a friend who had never been to New Orleans, had Jello shots, played pool, and of course, drank daiquiris.  The girls left there and went to a nail salon.  We keep it pretty, yanno.  We have no idea what the guys were up to.  Later, we went to the Quarter, ate heartily, then looked at all the Halloween costumes on Bourbon St.  It was a great night.

Sunday was a totally different experience, however. We went to the Lower 9th Ward, which is one of the most affected parts of the city because it’s near the levees. When we arrived at the Lower 9th Ward Village (which I plan to feature this Friday), we were all wary, ready to leave the project, straight throw the deuces, as soon as we were done with our assignment. Turns out we stayed 2 hours longer than the project was supposed to be. The morning started with an inspirational introduction from the Village CEO Mac McClendon, who started the community center to help his neighborhood after losing all his material things, including a house he had spent months renovating with his own hands. He explained to us what he went through during the storm and its aftermath, looking for his family, dealing with the smell of death when he returned, finding out that silence is a deafening sound. He said that hearing a car was a treat because there were literally no sounds—no birds chirping, no dogs barking, no crickets chirping, nothing. Out of hopelessness, he found his purpose in life and now, he’s running this center, still rebuilding his own life, but giving to his neighbors. Because there’s a law saying that if the grass is over 18 inches, a lot can be seized, we spent our morning cutting grass and weeds. Although the project wasn’t as “glamorous” as creating a garden, we felt like we had become a part of this community. After we were done, we spent two hours talking to Mr. McClendon about his life and experiences, with his younger brother who is the Program Director at the center, and with a couple of elderly residents who just wanted to pick our brains and get us thinking. We didn’t want to go, but we had to so that we could get home.  Here’s a link to a clip of the convo we had with Mr. McClendon.

The difference between those two projects illustrates the true meaning of community building—we volunteer, but why? To do good, yes, but more importantly, to build and restore communities. When I go back to New Orleans again to work, I’ll definitely be going back to see what my new friends at the Lower 9th Ward Village need. I won’t give up on helping other parts of the city, but I definitely want to dedicate at least part of my time to the ongoing efforts in the Lower 9th Ward.  I hope that next time you will come with us. 🙂  Here are links to the pictures.  Oh the memories. 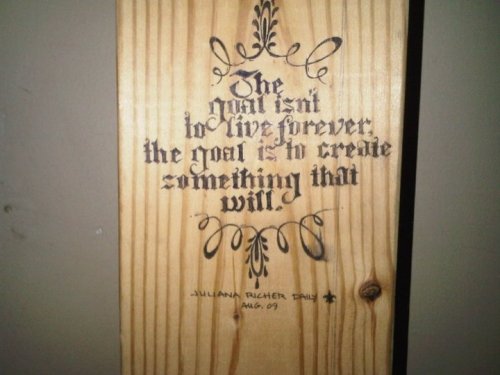