On Tuesday night, a group of 15 of us went to see The Help, a movie I’ve been waiting to see since I read the book over a year ago. I was a bit happy it’s been awhile since I read the book because sometimes I can get so caught up in what details *I* would have made sure was captured on screen that I can’t enjoyed the movie adaptation. However, I’m sure it helped that I was hoping some things got lost in translation.

(As an aside, I did wear a dress my grandma used to wear.)

I’ll try not to spoil anything for those of you planning to see it, but there will be a minor few.

Minny was great. Octavia Spencer did a beautiful job balancing her two-sided role. I think she stole the show for me. Minny had to be my favorite character in the movie, along with Celia Foote. Minny was spunky, really sweet to Aibileen, and did a good job showing when she was trying to be spunky through wanting to be mushy. I was glad that in the movie Celia wasn’t just straight overdone and completely trashy looking. And I’m happy she wasn’t as weird as she was in the book. Celia on screen was actually pretty fabulous in a Marilyn Monroe sorta way–just too much for society ladies in the 60s. That pink dress she has on at the banquet? Yeah, I need that. Jessica Rabbit in the house!

Viola Davis did a good job as well–my favorite scene with her reminded so much of any of the women in my family. She was telling a funny story and she just laughed and laughed, showing off a gold tooth in the back of her mouth. That scene was just so endearing to me, one–because Skeeter didn’t really get the joke but also, two–Aibileen had loosened up a bit and really showed her “at home” self. I also enjoyed Aibileen’s relationship with Mae Mobley, poor little thing. And Mae Mobley sitting on a toilet in Hilly’s yard was just as funny on screen as in the book.

Since the movie really focused on the women in the book, black men weren’t accosted on screen as villains. Of course Minny’s Leroy was a negative character, but it wasn’t reinforced with so many other trifling characters.

Dallas Bryce Howard did a great job of Hilly. She definitely was the rude, conniving, better-than-everyone else (i.e. horty torty) mean girl who bullied and led anyone who’d let her.

I’m sure I glowed when I saw the street sign that said Maple Street. My mom and my mentor grew up near Maple Street. In the movie, though, Maple Street was in the white part of town, so I had to call my mom after the movie to ask her if Maple Street ran through both sides. She said she thinks so. But noone who has any Lanier High Bulldog living in their home will ever be allowed to not know what 833 Maple Street is. *rolling eyes and remembering my mom standing in the center of the vestibule of MY high school (Clinton High) in her maroon Bulldogs t-shirt when she was checking me out to attend the 1997 State Championship basketball game of my school against hers*

I definitely also glowed when Yulemay (played by Aunjanue Ellis, who attended Tougaloo for awhile) said she was sending her twin boys to TOUGALOO. 🙂 I liked that in the movie version Yulemay found the ring–not went actively looking.

Skeeter was a better character on screen than in the book. Instead of seeming so naive and oblivious of what was going on despite the fact that she was a journalism major during this time of turmoil, from the beginning of the movie, she was aware and bothered with the treatment of maids before she realized it was a way to get a NY publisher’s attention.

Skeeter’s mom was played by Allison Janney, and she did a great job of making that character relevant. I really enjoyed her character, even as she reminded me of my family members who ask when I’m getting married, lol. Also, she didn’t make being so old seem SO old. I liked that the movie placed her between a rock (being gracious to her maid) and  a hard place (peer pressure from her social circle) as Constantine was concerned–added a little complexity to that character for me.

Hilly’s mom, played by Sissy Spacek, was hilarious. I loved her. Still don’t understand why she was so old–but if she had to be, Sissy Spacek made it worth the while. My fave scene was as she was leaving the Christmas gala and had a few words with her ugly acting daughter.

I think they did a good job of showing how asinine wanting to make someone who takes care of not only your house but your kids use an outside restroom was. Particularly when Aibileen came out of her “special” restroom without being able to wash her hands to take Mae Mobley out of her mom’s hands. You think it’s nasty to sit on a toilet seat after a black person but not nasty for anyone who hasn’t washed her hands to handle your child? Ohhhh kaaaaay…

Medgar Evers wasn’t bludgeoned in the movie!! He was shot as he was in real life. Thanks, producers, for getting that detail right. Also, the scene where Aibileen had to run and get home–I thought it was pretty ok. But really only because she tripped. That’s the moment that I really felt like there was an urgency to get home to safety. (It also wasn’t really clear to me what she was running from in the movie.)

This isn’t good or bad.. Just an observation. I hope people noticed that the white women who were reading The Help at the end of the movie weren’t reading and getting aha moments about how they treated their maids–they were reading like it was a gossip column. No warm and fuzzy unrealistic kumbaya at the end of this story.

The Not So Good

They didn’t show Skeeter being ostracized the way that would have driven the tension in the time period home. While I don’t think the movie needed to be bogged down with darkness, I don’t think it was clear enough how dangerous Skeeter going to meet Aibileen was.

I would have liked them to spend a little more time on Aibileen’s prayer book. I mean, heck, I started writing in my own prayer book after reading that story. 🙂

Stuart wasn’t impressive. He didn’t have the “swagger” he had in my brain after reading the book. He didn’t have the connections or the social standing. He was just a run of the mill tall guy who thought Skeeter was funny. And I think if he had been a more complex character, their breakup would have been more interesting.

I would have liked more of a back story on why Skeeter and Constantine were so close. When they showed Skeeter’s height marks at Constantine’s house, I just wondered how many people in the theater were wondering why in the world this little girl would have spent so much time at a black woman’s house.

From the pictures I’ve seen, the black side of Jackson did not look that bad in the 60s. I was a bit thrown off by how run down all the houses looked in the black neighborhood. They looked like some of those houses look now that they’ve been abandoned and in ill repair for years. I know by the time my mom and dad were between 10-15, they weren’t living in shanty houses. I could be wrong, but I thought that was a bit exaggerated.

Cicely Tyson. Period. She plays the same character in EVERY thing. Ugggggh.

WHY WAS CONSTANTINE SO OLD? She was old even when Skeeter was a child. GEEZ. I thought it was hilarious when Skeeter told her mom in an accusatory tone that Constantine died of heartbreak because I was thinking no she died because she was ANCIENT. (I also thought it was hilarious and typical that someone would think that a maid’s world revolved around them and worth dying over when they lost a job–not complaining though because I’m sure plenty of people had that misconception. It’s like when Skeeter realized she had never seen Aibileen in regular clothes.)

I’m so excited! One of our Reads is finally hitting the big screen. This one was near and dear to me when the book came out because it’s set in my hometown of Jackson, Mississippi. On Tuesday, Reads and Reels is checking out the screening. Afterward, we’re headed to Vinings Inn to partake in yummy southern fare and discuss the movie. 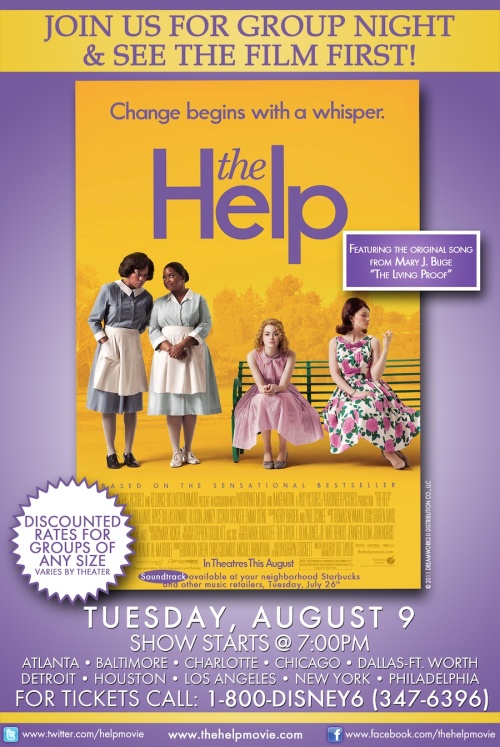 The Help by Kathryn Stockett is set during the Civil Rights era and is narrated by three characters: two maids and a young white woman home fresh from college looking for a serious writing gig who ends up helping maids across Jackson tell their stories.

If you haven’t read the book, you should. It is a very enjoyable (and easy) read. The characters are very relatable–I guarantee your brain will be able to easily develop pictures and profiles of these characters–you may even be able to insert someone you already know into these roles. From the awkward and somewhat naive Skeeter to the uber bitchy and manipulative Hilly to the wise and nurturing Aibileen to the  sassy yet secretly fragile Minny. And I can’t forget the “new money” loud but sweet Celia. Stockett did a great job developing these characters and weaving stories to really draw readers into the lives of these characters.

Of course, because I’m me and I get so caught up in books, the couple of issues I had with the book nagged at me the whole time I was reading. These issues are:

***EDIT (insert): I found this forum on Amazon, and it’s a reeeeeally interesting conversation about the issues that some readers have had with the book. Check it out as I am. 🙂 Esp if you liked the book but just didn’t feel warm and fuzzy when done with it***

So as I anticipate the book come to life, I’m hoping that the movie captures the complexity of Minny–she’s deliciously spunky but still delicate. I also hope that the movie shows a couple of the back stories of characters that weren’t major in the book, like the woman who stole the costume jewelry from that winch Hilly (you know a book has well-developed characters when you really feel true negativity toward a character!) to help pay for her twin boys to stay at Tougaloo (HOLLA!) and ended up catching holy hell because of it.

Can you tell that I am soooooooooo excited to see the movie? After spending time casting actresses with my fellow readers, I’m looking forward to seeing the official cast and the movie interpretation. What about you?

What did you think of the book? What are you expecting of the movie?

When I met Lorenda back in 2003 or 2004, her positivity was obvious and even contagious.  She’s from my hometown of Jackson, Mississippi, a graduate of my alma mater, Tougaloo College, and a sorority sister from my initiation chapter, Gamma Omicron, the premiere undergraduate chapter of MS of Alpha Kappa Alpha Sorority, Inc.

Lorenda’s contributions to the youth of Jackson are outstanding.  She is currently the principal of Oak Forest Elementary School, a Girl Scouts troop leader, and the founder of “It’s Hip to Be Fit,” a health and fitness program for girls.  Lorenda was recently named Jackson’s Community Champion for 2010.  She is now vying for General Mills’ Feeding Dream National Community Champion, which would result in $10,000 for Girl Scouts of Greater Mississippi.

Please follow the links in this post to read more about Lorenda, then please go vote for her everyday until Oct. 31!